If you know the Central Coast, you know that one of the biggest names is Paso Robles, but did you know it could be further divided, like Napa?

In fact, it has 11 sub-AVAs.  I’m not going to be that specific, but I will be splitting it in half: dividing the east from the west.

Paso Robles East is the area to the east of the 101, and encompasses more acreage, while Paso West is west of the 101 and closer to the ocean.

Paso East is known for producing more of the high-volume, cheaper stuff that comes out of Paso, so if you see a bottle for under $20 on your grocery store shelf, chances are it came from the East side.

According to Matt Kramer in The New California Wine, the west siders have formed associations to distinguish themselves from the eastsiders. The westside is known for more boutique, expensive, and craftsman-quality wine, and perhaps they want to protect their reputation.

The east side does have an association (The Wineries of 46 East), but who knows who started it.  “The line in the chalky soil has unmistakably been drawn,” says Kramer.

Proletariat that I am, I identified with the east side.  Who wants to spend $40 for a bottle of wine when you can get the spirit of the place for $20?

And according to Kramer, the weather of the east side supports the flavor profile Paso is known for: fruity, chocolatey and soft (low-acid) without being flabby.

Paso East has hot days and cool nights, with the average maximum being 93 degrees in July and August, and 52 degrees at night.  The only other wine growing region that has a bigger diurnal shift is Washington’s Yakima Valley, according to Kramer.

Paso West has a big swing, too, but is not quite as hot.  The grapes (in the east) ripen early and make for a round wine that appears lighter in body than, say a Napa wine.

In fact, according to a Paso wine pourer I talked to, the growing season is shorter in Paso than Napa.  So while you might not get the depth or ageworthiness of a Napa cab, you’ll get an elegance and food-friendliness.

Then the cool nights encourage the grapes to retain acid, thus not becoming flabby.

Lindsey Pomeroy of WineFolly says Paso wines have “a surprising backbone of acidity that will make you sit up straight in your seat,” but I tend to agree with Kramer.  I think they are soft.  They have just enough acidity to make for a memorable wine.  If you like that style, you will like these wines.

Cabernet is what the area is known for.

It has a history of Zinfandel, and also makes a lot of Syrah, but according to WineFolly, 55% of vines are devoted to Cabernet and Bordeaux varietals.  In any case, the area is known more for reds than whites.

I opened a 2014 Robert Hall Cabernet for my taste of Paso East. I got it at my local grocery store for $14, so you should have no problem finding it, too. 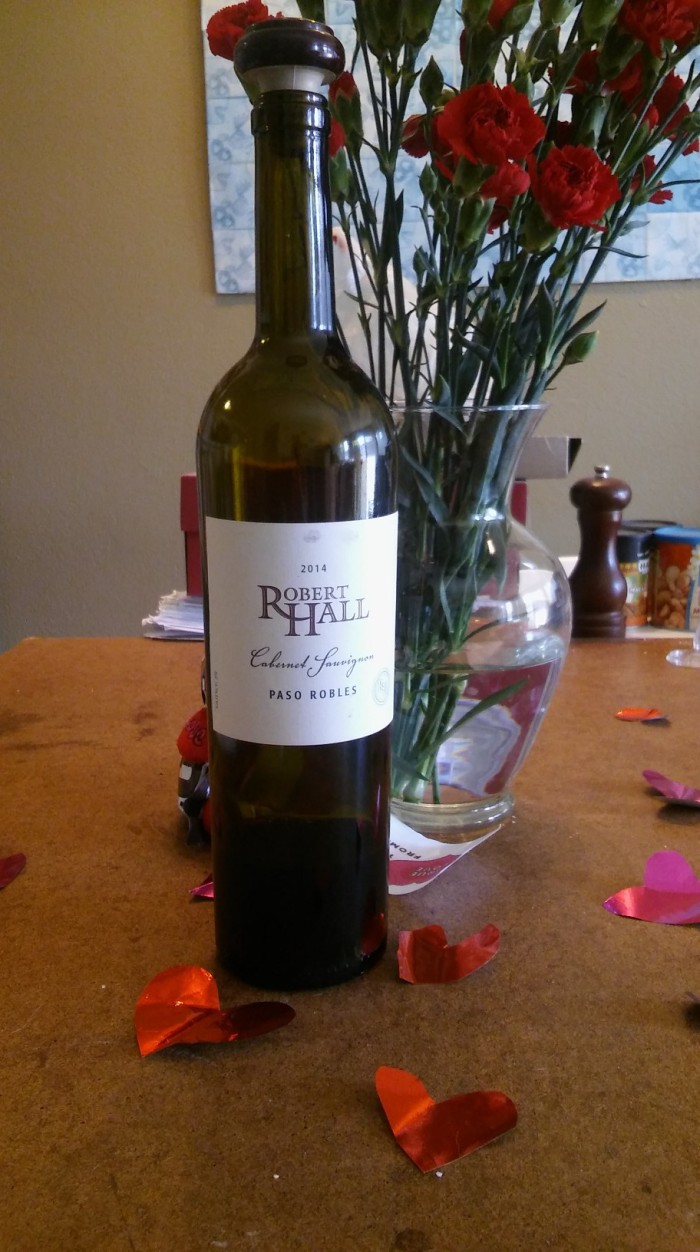 Our 2014 Cabernet Sauvignon is a product of several Paso Robles vineyards planted from the southern banks of the Estrella to the southernmost area of the “Creston District.”  (Note: these are eastside AVAs–see map.) Here our Cabernet Sauvignon grapes have matured to full intensity on rolling sandy loam hills and terraces of the Estrella Basin and on the ancient uplifted sea beds found in the southern reaches of Creston.  The fusion of bright fruit-forward Cabernet produced on a more generous loamy soil with intense fully ripe Cabernet Sauvignon from a sparse rocky site yields a blend with opulent fruit, intriguing complexity, and satisfying structure. (Another note: sandy soils make soft wines.)

My notes on this wine:

Palate: Pomegranate syrup and dried rose petals, with a nice harmony of red and black fruit.  Lighter in body than a Napa cab, almost like a Merlot.

Tobacco and dried roses give it a nice crunchiness, like an Italian wine.  A nice surprise: more tannin than you typically get on everyday wine these days.

And on further reflection, I can also taste the chocolate that Kramer is talking about.

I have loved learning about Paso Robles East.  Do you like Paso Robles?  Let me know in the comments below.

Carol Maskus Serious wine geek with a love for the craft of writing, also special educator and artist.
Published February 24, 2017May 15, 2017